For the protection, preservation and promotion of Bangladeshi heritage fabrics.

Established in 2013, the Muslin Trust is a not-for profit registered charity whose purpose is to:

♦︎ Uplift, sustain, develop and preserve the traditional skills and art forms of weaving in Bangladesh
♦︎ Create international awareness of the textiles and fabrics of Bangladesh.
♦︎ Create awareness of the art in as a fashion textile, and in so doing, create strategic partnerships and alliances with interested stakeholders to achieve our mutual objectives

The Muslin Trust is managed by a group of volunteer trustees.

An Introduction to the Aims and Objectives of the Muslin Trust

♦︎ To promote, sustain and preserve the tradition of woven textiles in Bangladesh through education, research and partnerships.
♦︎ To raise awareness of Bangladeshi traditional textiles in the wider community in the UK and other parts of the world.
♦︎ To promote research at the highest academic levels into identifying the variety of cotton historically used to make fine muslin, and establishing whether plants or viable seed still exist and can be cultivated for the production of high quality cotton for muslin weaving.
♦︎ If it is proven that the muslin seed can be revived, to work in partnership with suitable organisations and individuals to pursue its revival and ultimate production.
♦︎ To uplift weaving skills in Bangladesh by creating a master weaving community.
♦︎ To work in partnership with suitable bodies and individuals so as to further the objects of the Muslin Trust. 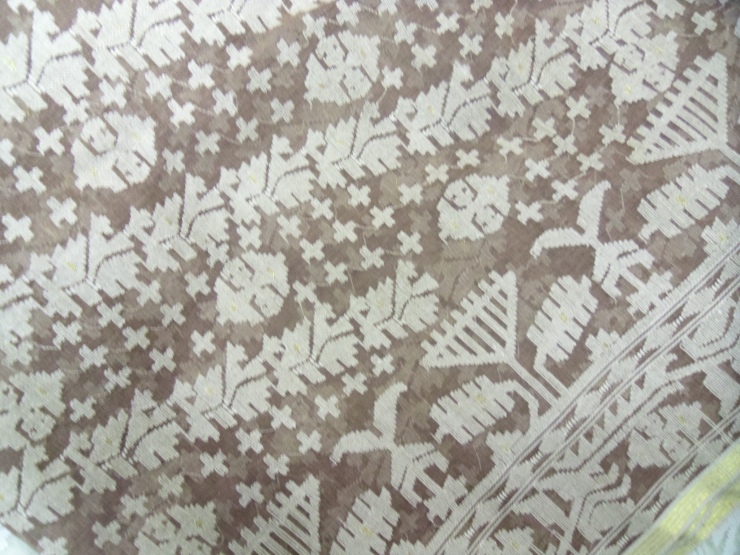 For centuries, the Bengal region, more specifically around Dhaka, the capital of present day Bangladesh, was known as a centre of some of the most prized and superfine hand woven cotton textiles in the world. Traders came from faraway places to buy the unique cotton textiles which ordinary people in the region produced. Travellers and buyers of the time wrote extensively about the quality and reputation of Bengal’s muslins textiles in their travel journals, often with mythical descriptions and with great admiration of skill and design.

We know that these textiles were highly valued and sought after by different sections of society and were used mostly for different style of sewn and wrapped garments. Bengal was amongst several textile export centres in India during the 17th, 18th and early 19th centuries with their own unique specialisations that supplied fabrics to the world; Bengal’s muslins including woven Jamdani were unsurpassed.

Recently, there has been an increase in appreciation of arts and crafts originating from around the world. Many traditions have died and many others are on the verge of extinction. Efforts are being made by many agencies and individuals to prevent those in danger from being lost. It is for this reason the Muslin Trust was established to support these efforts.